1. Latest form of blackface theatre, this time depicting pandering stereotypes of desi folk in the US.

Used to be sole provenance of FOB / ABCD actors with monosyllabic/generic stage names ("Hey, call me Kumar! ") but lately has gone more mainstream.

A brownface character is typically obsessed with, by and from a dau, lau or semi-arranged marriage; or all of the above.

2. The color of a paleface firang once he/she has mud or Number Two thrown on it. Usually because the firang has done something bad to deserve an involuntary headbath.

3. Affectionate dimunitive for Ass-ton Kutcher, or for any other waste fellow chillar enough to make a career out of being consistently faltu and ghati.

Brownface John: (in a fake Indian accent) "Why don't you take me to your convenience store so I can meet your sister and toot-toot-toot-toot?" (bobblehead)

Brownface John: "OK OK, at least can you say 'Thank you come again!' ?" 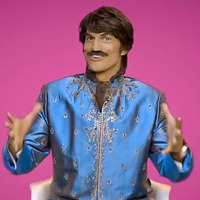