sweeping, colorful work of fiction about India, this variation on the magnum opus usually has a title that involves a fruit, an animal, a color, or some combination thereof.

It is often appreciated by foreigners as informative about the country, while being mocked by people who consider themselves truly Indian (a category we would not venture to define, but hope some intrepid Samosapedia contributor eventually will), who say they find it to be inauthentic and full of clichés.

It’s the fictional equivalent of a piña colada, if you will – exotic and tropical, and more frequently consumed by visitors than locals. It is usually followed by a more subdued second work whose title is not floral or fruity, as a U.S. or British literary agent is already in hand.

Sofa Sadhu:Could Karma Kola by Gita Mehta be a Mango Opus? Or maybe not because its making fun of people whose understanding of India is superficial? But in dong that it attracted the very audience it attempts to denounce?
Arvind: Bleddy Idiot stop being so highbrown and pass me the bonda
Added 2011-08-12 by Dishoom Dishoom
Add an Image
Add a Video 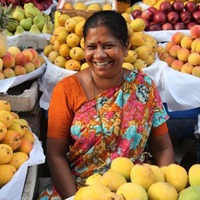