Blast from the past (no pun intended!)

A gun whose name is derived from a Czech word (howitzer), a Swedish company (Bofors), the Indian gorement, an Italian with the name Ottavio Quattrocchi cosmically collided and were entangled in India's biggest scandal in the 80s.

Aiming to replace the old field guns and artillery in the hands of the Army, the Indian government feeling full josh decided to buy bigger calibre 155 mm howitzers manufactured by Bofors of Sweden, a company which was once owned by Alfred Nobel. Allegedly, the government took huge kickbacks in the process and a powerful Italian businessman was said to be a broker in the deal.

While this happened 25 years ago, Bofors is seen as the precursor to Coalgate, Spectrum Raja and all other major scandals.

"With the Swedish whistleblower in the Bofors case giving him a clean chit, megastar Amitabh Bachchan (Big B) today said truth had prevailed but nobody could fathom the anguish he had to go through because of the "petulant blame"."
Added 2012-09-22 by Dishoom Dishoom
Add an Image
Add a Video 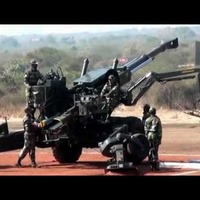