1. Vande Mataram is a 1997 studio album by musician A. R. Rahman. It is the largest selling Indian non-film album to date and has been instrumental in instilling a sense of patriotic pride in India. The song is played at national events, before cricket matches and on tv especially when skirmish's with Pakistan happen.
2. Vande Mataram is the title of a poem/hymn in the 1882 novel Anandamatha by Bankimchandra Chattopadhyay dedicated to the goddess Durga. It came to be considered the "National Song of India", Many Muslim organizations in India have declared fatwas against singing Vande Mataram, due to the song suggesting the worshiping of "Mother India". Tagore's Jana Gana Mana was chosen as the National Anthem and Vande Mataram was rejected on the grounds that other religions who did not believe in Durga would feel offended by its depiction of the nation as a Hindu goddess.

I show gratitude to thee, Mother,
richly-watered, richly-fruited,
cool with the winds of the south,
dark with the crops of the harvests,
The Mother!

Her nights rejoicing in the glory of the moonlight,
her lands clothed beautifully with her trees in flowering bloom,
sweet of laughter, sweet of speech,
The Mother, giver of boons, giver of bliss

Motu: Lets all sing Vande mataram and feel patriotic.
Chotu: Why are Robert, Lobsang and Akbar not singing ? 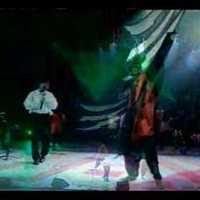