Though not a trained lawyer, one who is reasonably familiar with the halls of power and centers of influence be it Municipality, Law enforcement, Judiciary, DC office or even mass medias.

He has some command over the local language and some petition English, both just sufficient to draft and forge (!) letters, appeals for help, complaints, agreements, anonymous letters, benami property titles(!), and letters to the editor.

Respected Madam, Please note herein that a phoot lawyer also sets his signature on any document as a witness even without perusing it, but acting as if he is actually reading it, by moving his eyes over the document. He is concerned about the spirit of the act of setting his signature: a pecuniary benefit, not the letters on the paper which he can not really decipher, at least not in a hurry.

The 'Phoot' part of the term seems to come from 'foot'. The expression 'bare foot doctors' makes me think that way. Maybe it's not so, perhaps.

Fight with anybody, but never with a phoot lawyer of the town.

He knows only 800 words in his vernacular and 180 of petition English. With just that many words, an ink pen and a revenue stamp, he can cause little earthquakes.

He knows every dog in town and anyone that has any connection with any building that goes for an office.
Local journos are his chaddi dosts.

If you have a tricky situation with a phoot lawyer and think it's safer to avoid him, do not fail to exchange pleasantries and buy him a coffee before disappearing from the scene. 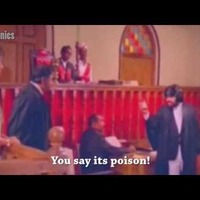 The Best Court Argument Presented in a Feature Film