Intentional Rolling Blackouts. Except you never knew when. And for how long. Or why. Or if it would ever come back. You just brought out the thick white candles, struck up the Cheetah Matches, roasted the lower ends of the candles until they would stick to various surfaces around the house, and went about business as usual.

Homework would be done in candle light, bucket baths taken, food would be prepared by gas stove and candle light, Reynolds pens would be systematically melted into devious shapes in the candle flame, and the general state of the nation would be bemoaned until the lights flickered back on.

The return of the shed load was a visceral experience in itself. First the incandescent bulbs would flash on as eyes would widen in joyous surprise, then the fan would be heard cranking up before its soothing breeze was felt and this brought a quieter satisfaction, and the feeling was still meditative. Then, last but not least was the tubelight flickering on, bringing with it its telltale breed of cold reality, and it was business as usual (again)...

Sushmita: Ok, it finally happened, I lost my virginity!
Laxmi: Wow, good fun? How did it happen yaa?
Sushmita: By candle light!
Laxmi: Oooo, how romantic, I didn't take him for the romantic type I say... were the candles his idea or yours?
Sushmita: Umm. Load shedding.
Added 2011-07-07 by Studmuffin
Add an Image
Add a Video

after a heavy belting session of food, you need to go shed some load da!
every morning i read newspaper while load shedding ra!
Added 2011-07-29 by whattey!!
Add an Image
Add a Video 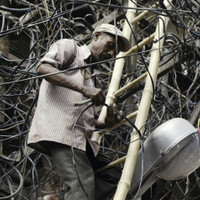