Indian toilet is an amputated upper torso of western toilet. Indian toilet has a gradual slope unlike the western toilet. This is done to facilitate, umm, easy landing. An innovative design indeed.
It would be debatable to conclude that Indian toilets are eco-friendly only because Indians do not use toilet paper. The same purpose is served by precious water -- and a lot of it.

A typical Indian toilet will look like this:
A faded bowl which was milky white when it was installed, but is considerably less white given a long history of usage. A container (typically an Asian Paints Dabba used for last Diwali) under a leaking tap. Vestigial hair, dead ants and other ill fated arthropods in the four corners. Flushing system which makes an unearthly long lasting dissonance when used.

Traditional Girl with modern Outlook: His house only has an Indian toilet? Thoo! I want nothing to do with that fellow.
Added 2011-07-28 by Fraaandshipper
Add an Image
Add a Video 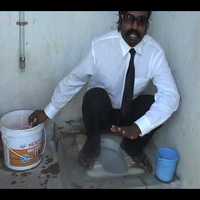