How can she slap?

How Can She Slap?! is a catchphrase stemming from an incident that occurred during the shoot of Bindass Dadagiri, an Indian reality TV show that claims to be the “meanest TV show” on Indian television.

Premise of the show is: four students revisit the horrors of being ragged and compete against each other by doing crazy shit that only mentals would undertake.

The incident happened on the first season of the show, when Esha, one of the Dadas, told contestant Ravi Bhatia to “go fuck off” and he responded, “You go.” Angered, Esha made an unscripted thapad across Ravi’s face and he responded with an unscripted kolt back at her. The show crew appears from off the sides of the set and then began thulping him up, all the while he yells his now famous phrase, “HOW CAN SHE SLAP?!?”

This meme never gets old. 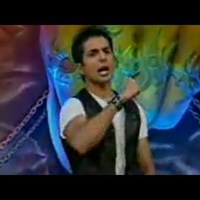 How Can She Slap?