The name given to a royal enfield motorbike.

By 1970, Enfield India was a company established in its own right. A number of changes had already been made to the tinware on the Bullet. Mudgaurd design took on different forms, taking into account the slushy road conditions during the Indian monsoon. front and rear hubs were designed to provide more efficient cooling for Indian conditions, and thus improve braking performance.

The bike was called the bullet.

A bullet is dependable and rugged.
Added 2011-09-08 by porkipaya
Add an Image
Add a Video 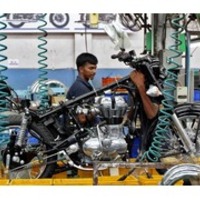 A Cult Motorcycle From India Takes On the World