A yoga guru, tv personality and business entrepreneur and enthu cutlet. He initially became famous for teaching the junta how to do breathing exercises and yoga on tv.

Previously Sri Sri Sri Sri Ravi Shankar, through his Art of Living had been charging people to teach them traditional breathing exercises, but Baba Ramdev jammed in and destroyed the poor fellows business plan.

Baba Ramdev became more famous when he decided that all of India's black money from swiss accounts had to be brought back to India. So like every respectable and sane persons, he decided to fast. But it simms the gorement did not approve of this and decided to lathi charge and all him and his followers. The poor fellow had to change into ladice clothes and run for his life from the agitation.

He owns one number island somewhere and over 600 companies yevrywhere. He also does not pay any amount of taxes to the gorement, because it simms he is an NGO. He hates cock with a vengeance and tries to join civil society every now and then.

Baba Ramdev to junta, "Clean your indian toilet with cock, do your jhaadu pocha with cock, it is better than any disinfectant."
Added 2011-08-19 by Mildly Racist
Add an Image
Add a Video 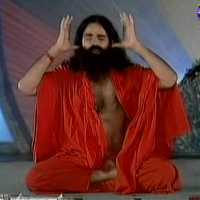