What would we do without the auto-rickshaw?

What other automobile would lend itself so well to self expression- disco lights, rockin' music?

Who would ask us for Rs.300 to go anywhere because Vishnuvardhan is ill or the Central govt are porkis or where you live is just not exciting enough?

Who would block the whole road because they are pushing their friend's auto by foot, uphill to the petrol bunk?

Where would we read such beauties as "romanse nimans" and above mother there is no other?

Above Mother There Is No Other 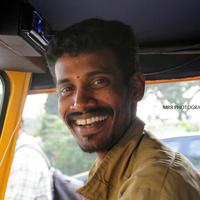