Barsati is derived from the hindi word "Barsat".
A Barsati is a small rooftop room or usually a one-room apartment on the terrace with a verandah outside.
It is a popular paying guest accomadation in South Delhi as owners usually give Barsatis out on rent on a standalone basis .Likely to be unfurnished.Toilet may not have a bum washer
Primary purposes of a Barsati :Love nest/bachelor(ette) pad /Rich brat's party plot.

NRI girl to friend: I've found myself a wonderful Barsati in Hauz Khaz for 8 grand.I can sit out and have chai during the rains.When my Romanian boyfriend visits India,we both will sit and sip coffee on the ledge.He'll surely love Delhi and India,if he stays in a Barsati!
Added 2011-10-11 by Behenjigaga
Add an Image
Add a Video

Hemp or marijuana taken in liquid form, usually with milk. Bhang is usually drunk during the festival of holi.

A pink coloured candy which tastes like paan. It was really popular back in the 80's and was the main market competitor of Paan Pasand.

Now it is a Kannada slang word meaning "romantic intent" but carrying more suggestive overtones. Road-side Romeos distinguish this word from a similar yet orthogonal word dau which means "lustful intent" and is more anatomical in execution.

The gap between lau and dau is the saga of frustruated youth in Bangalore.

"Lau me or hate me, kiss me or kill me... Oh doorling please do something to me" (Dr. Rajkumar, in Europe)
Lau me or Hate me YouTube Video

In adversity, everything takes a bad turn. Literally means, "the dough is runny in poverty." Atta is the word for dough, typically used to make rotis and chappatis.

Used during worse situation within life. Actually means that in bad phase, everything goes out of control. A small amount of additional water will spoil the meal of a poor person who has limited flour to make bread.

Example: Arrey, what to tell you, yaar? Lost my job. My car was in an accident. Son in US has been layed off. Then, lost my wife to a younger man. Garibi mein atta geela *sigh.

The 26th of January is "Republic Day" in India, and generally is a day to commemorate the adoption of the Indian Constitution by the whole country on the same day in 1950. Much soul-searching still goes on about whether the ideals in the constitutional preamble are lived up to, 63 or so years later, but we leave that more complex discussion for other sofa sadhus. It's a public holiday, after all, so let's all chillax.

Republic Day is celebrated with great pomp in Dilli, where an impressive parade takes place around the India Gate area, featuring floats, military men and women, and impressive mustachioed baton-twirlers, some even wearing kilts. As an eng bai, it would thrill the heart of this definer to see elephants, camels, and horses pass by during the parade, along with tanks and jeeps and colourful representatives from all over the country.

Now of course, a not-so-very eng bai might decide that watching the parade on TV makes him feel morose and lonely and pensive, given all that the country has been through recently. So then he decides that watching it while sipping IMFL would really be living well, except he then realizes that Republic Day is a state-mandated Dry Day, so no such luck. So he watches the parade feeling morose and lonely and pensive, and tries hard to remember when the pageantry of it all would sweep him away.

Macha, let's go to Coorg to visit Thimmi, no? We'll get a long weekend because of Republic Day. And I'll buy thanni for our trip, don't worry about the dry day naansense.
Added 2013-01-24 by mainmacha
Add an Image
Add a Video

This harvest festival goes by many names in different parts of the subcontinent, and in each region it is celebrated with distinct rituals and traditions. (See Wikipedia for details of customs followed in various states on this day) The most famous image of Makar Sankranti has come to be the thousands of colourful kites that are flown by Gujaratis all over Gujarat to mark the occassion.

Etymology : 'Makar' refers to the zodiac sign of Capricorn. Thus, Makar Sankranti denotes the changing path of the sun into the house of Capricorn.

Unlike other Indian festivals, Makar Sankranti always falls on the 14th of January each year.
Added 2012-01-14 by Surdie Birdie
Add an Image
Add a Video

What do you think of that Ashu chap, yaar?

@Ashes, you just click the inverted ThumsUp sign. Currently, we've got a bit of a bug counting clicks, but it works out in the end. Why yuvar giving thumsdown and all, btw?

How do I give a thumbs down?

Most indian children have uniforms in school, so they cannot fully express their ishtyle. Most children also never buy new clothes, they get hand-me downs from Amreeka relatives. So on a day they happen to wear something new - their friends will give them a pinch or a "new pinch". I have no idea why!

to denote a shirt or pant which is gaudy/flashy. Also when the combination is horribly bad...like a peppermint pink shirt and a green pant.

(Why r u killing me by wearing this ramarajan color dress)

Subscribe to our Word-of-the-Day email to get your daily dose of Chutney!

Thanks!
Check your email so we can verify you\'re not a booth!

Anonymous User added Why Aadhaar Card ? Nagaraju in Interview Video by Danish Sait to their favorites 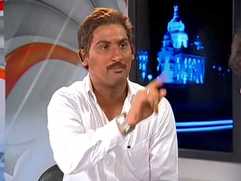